Mediocrity and Technology
I have been thinking a lot about mediocrity recently.  This is probably driven by the election cycle.  Recently, I said “Google had the mediocrity of Microsoft without the greed of Bill Gates”.  Google and Microsoft prove that you can produce mediocre products and services if you manage either through luck or effort to dominate your segment.  I think we can add Facebook to that list now.  With the billions it raised in its recent IPO, Facebook has the ability to maintain its position and buy up any challengers.

I have mixed Feelings about Facebook
I use Facebook almost every day.  I have 950 “friends” down for 1000 and hope to reduce this to about 500.  I have uploaded  375 photos and have 208 “likes”.  I post status almost every day and try to post things that are interesting and/or funny.  It even appears that I have a Facebook following.

The concept of a Social Network is a very powerful idea.  Frankly, while I was aware of this concept (see post about  Geocities), I did not really understand the power of it.  As far back as the early 90s, I was pretty sure that much of the content on the internet would be created by the “audience”  but  I did not realize that this kind of “conversation” would play such a profound role.

Many may disagree with me, but I think Facebook is an example of recognizing an opportunity and pursuing it with focus and passion at just the right moment in time.  Facebook and Mark Zuckerberg remind me of Microsoft and Bill Gates.  Both companies have dominated a major part of the computer ecosystem with mediocre products. Zuckerberg, whom I have never met (I think he was probably 16 years old when I left Intel in 1999) reminds me of Gates. Both men understood the their opportunity and would stop at nothing to achieve it including diminishing the role of their co founders.  Neither of these founders cared much for their customers nor took much pride in there products  And neither of them had a sense of design.  It is rumored that Zuckerberg wants to model himself after Steve Jobs.  Zuckerberg is no Steve Jobs.

For years, I suffered using Windows on my PC. Now, I  am Apple based and Microsoft Free. I am hoping that I will have the similar experience and something will come along to replace Facebook.  Too bad Google is so mediocre or Google + could have done that.

Now for the IPO
It has been interesting observing the Facebook IPO.  I never thought that Facebook would be able to go public because of all the law suits I suspected would come out against Zuckerberg.  I guess there were less of these than I thought or people were bought off prior to the IPO.  The IPO was clearly miss managed.  But managing an IPO is very difficult when the company is “hot”.  If you set the price low and do not offer a lot of stock (float), the stock will trade up and people will say the company left money on the table while the Investment Banker’s friends made out.  If you do as Facebook did and raise the price an the number of shares, you the disappointment in the market. By the way, these are what one calls “high class problems”.

One of the crazy things about this IPO was the amount of stock already out in private hands.  And then the crazy way restricted stock options vested liquidity.

Also, there were a lot of short sellers on the day of the IPO which is not suppose to happen. 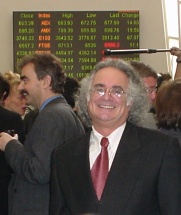 nce with an IPO gone wrong.  I was on the board of World Online when the company went public on March 17,2000.  World Online was the dominant Internet company in Holland.  The IPO was the biggest ever for the Netherlands Stock Exchange and the biggest IPO for a European Tech Company.  ABN AMRO and Goldman Sachs were the key underwriters.

We went public at 43 euro’s and the stock traded up briefly to 50 euros. The stock was 12 times oversubscribed.  That was the reason that the underwriters had recommended to the board that we price at the highest level we had indicated and make a full allotment of stock.  Frankly, what could the board do other than follow that recommendation. In fact on the London Grey market the night before the stock was trading at 72 Euros.

By the end of the first day the stock was back at the 43 euro opening price and would have been lower had the underwriters not been trying to stabilize  the stock.  On its second day of trading, WOL tumbled 16% below its listing price. By March 22 the stock was trading at 31 euro.  The stock continued to fall over the next days; its value plunging from 12 billion Euro to 5 billion in a week.  There were a lot of factors for the decline of the stock.  Some of these are similar to the Facebook situation.  For instance a lot of stock was bought by people who were speculating on the stock appreciating substantially.  When this did not happen, they unloaded quickly driving the price down fast.  Many of the speculators were afraid they would not get enough stock so they place extra orders creating the sense of more demand then was actual.  Some individuals and companies that owned stock and were not subject to lock up’s began to unload.  Information was put out to further drive down the stock.  In particular information that had not  been clearly disclosed in the prospectus about a previous sale by the CEO, Nina Brink, was cited as a reason for the stock decline.   Probably the most important factor was the overall decline of technology stocks (the bubble) which started on March 10, 2000, just a week before the World Online offering.   On Sept. 7th, 2000, we sold World Online to Tiscali a major Italian Internet Provider.  I remember spending the very early morning selling my shares for about 7 euro a share.  I can’t complain because I still did very well personally although obviously not as well as I would have at 50 euro.