about business / Technology / Thoughts about the Media Industry

Twenty years ago, I proclaimed that Advertising would be the Killer App of the Internet.  Now I am pronouncing the end of Advertising.  What will replace it as a source of revenue for media companies.  It will be the First Bank of Amazon. Read more!

Jonathan Taplin, a long time friend and former early internet entrepreneur, now a professor at USC and director of the Anneberg Center for Innovation was intrigued my recent blog post about advertising.  He asked to discuss it with me.  Below you will find the ideas I shared with him.   So we Skyped.  John Seely Brown, the former director of the Xerox Parc and that company’s Chief Scientist and  currently the Director of the  Deloitte Center for Innovation, joined  the conversation for the first few minutes. He and I served on the board of Maxis together before that company was sold to Electronic Arts and he wanted to say hello.    John Seely Brown is also board member of Amazon. For that reason, I want to be clear that he and I have never discussed Amazon but I do hope he reads this post.

Taplin is a truly interesting man who started his professional life as the tour manager for Bob Dylan and The Band; produced Martin Scorsese’ first feature film, Mean Streets; acted as an investment advisor to the Bass Brothers; and he founded Intertainer, one of the first video on demand internet sites.  Intel was an early investor.  Taplin ended up Academia.  He is one of the few people I’ve met professionally that has a crazier life story (or maybe not) than me.  His book, Outlaw Blues is well worth reading. 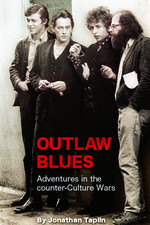 The primary purpose of advertising is to cause someone to purchase something.  There  is also advertising to get votes for candidates, support a concept, etc.  But most advertising is about selling.  In fact, the world of advertising created the consumer economy that we now experience.  It resulted from a time when there was an over-production of goods. Producers of these products needed to find a way to get consumers to buy things they did not actually need and in some cases, things that are

not actually good for them.  It may not be surprising to realize that the leader in advertising in the 1920s was the Tobacco  Industry.

We can divide advertising into the kind that encourages a consumer to directly take an action that results in a purchase and those that build desire and comfort with a product that will re-enforce a purchase decision at some later time.   I will call the first kind Transactional Advertising and the second kind, Brand Advertising.  My focus in this blog post will be on the first kind.

Different media (print, radio, TV etc.) are better at one or the other.  Digital Media is particularly suited for Transactional Advertising.  It is far easier to click on a link than to have to call a phone number or drive to a store.  The devastating  effects this has had on traditional media can be witnessed by watching the decline of the Newspaper Industry.

In 1993, I gave a key note speech at the National Association of Broadcasting in Los Vegas.  During my talk, I declared that the the Killer App for the Internet was Advertising.  The founders of Google were just 20 years old at that time and it would be several more years before the founding of Google.   Now, I am declaring that this phase is over.

The closer to a purchase the more valuable the Ad

Obviously, the more an Ad results in a purchase, the more valuable it is.  But it is difficult to know if a specific Ad has that effect.  Digital Media provides the ability to Narrow Cast advertising; that is to target advertising that might be more effective for particular  consumers.  If I know that someone plays golf and is a male, an Ad about golf clubs might be more effective than an Ad  about feminine hygiene products. This makes the Digital Medium superior to traditional linear medium for advertising.   While it might be possible for the traditional cable industry and their content partners to Narrow-Cast advertising, they lack of vision and technical skills has handicapped them in this regard.

The power of interactive digital media is that an Ad can result in a purchase just a few minutes later.The downside for the site hosting the Ad is that it often results in the consumer leaving their site in order to make the purchase.

We are saturated in ads. We are exposed to hundreds of Ads per day. Consumers are finding ways to reduce the onslaught of advertising.  In linear media such as TV, we are using DVRs to time shift and skip ads.  We listen to music on sites like  Spotify and are willing to pay a few bucks to avoid ads just as many of us are willing to pay for HBO or Netflix. The pay on demand or subscription model is clearly an alternative to the advertising model.  Sometimes there is a combination which has to be one of the stupid ideas of all time.  Hulu Plus does this, which I find combines the worst of two worlds (Ads and Subscription).

Web browsers like Chrome and Firefox offer Ad blockers.  I am pretty good at removing the Ad from the sites I visit.  Of course, I understand that these sites have to make money but I am not willing to pay for content with my attention.

The less effective Ads are, the more Ads are presented.  It is kind of like conversation in a noisy restaurant where everyone keeps talking louder in order to be heard.  I personally avoid these restaurants.

The Substitute for Transactional Advertising: The First Bank of Amazon

Sometime in the next five years we will see the collapse of advertising supported media.  Here is how it might play out with respect to the TV industry.

Chromecast, the Trojan Horse that Will Invade TV Manufacturers

Google recently created an amazing product, Chromecast  (I don’t think I have ever used the word “amazing product” and Google in the same sentence before).  It is a $35 device that plugs easily into a modern flat panel

TV via an HDMI port.  It connects to the internet over wifi to the home’s local area network. It is controlled right now by an iPhone or Android product or any computer running Chrome.  There is limited programing but that will change.  Eventually all television programing will move to such devices.  Cable companies will cut the cord with Network programers.  They already make more money from Broadband than they do from TV programing (you can thank me cable industry, for that).  HBO and Showtime and the like, will unbundle their programing from the Cable and Satellite packages (by the way DirecTV and Echostar are totally screwed and I will write about that in the future).

Netflix with ‘House of Cards’ and ‘Orange is the New Black’ has proven that traditional Hollywood does not have a lock on content.  Google and Amazon are not far behind.  Eventually, individual shows like Mad Man will go ala-cart.

Google will establish Chromecast as a viable way of getting TV programing. But they are stuck with the idea of traditional advertising.  They will offer their technology to TV manufacturer for no cost and offer to share revenue with them.  This gets the TV manufacturer out of the business of trying to keep up with Internet technology and provides a valuable revenue stream.  Once one or two manufactures go, all the others will be forced to follow.

Apple Forced to offer a TV

Apple, is in a bit of a bind.  They do not like to license their technology.  That is why they want to build a TV directly but they have to wait until the content is available.  Consumes will not upgrade their TV’s very quickly so this approach will be very limiting for Apple.

While Google has an ad centric business model much as do the Network TV companies, Apple will push for “pay per view” and subscription models like they now offer on their current AppleTV product via the iTunes Store.

Amazon enters and everything changes

Enter Amazon and the game changes.  Amazon will also have a devices similar to Google’s Chromecast with both an HDMI add-on and embedded technology for TV manufacturers.  TV manufacturers may not have to choose sides but offer Macro Networks from Google, Apple and Amazon.   Amazon’s business model will be different.  There will be no Ads.  Instead, Amazon customers (which is pretty much all of us) will get “points” for buying things on Amazon. These “points” will be deposited in the First Bank of Amazon and  can be used to pay for programing including on line newspapers, social networks etc. Imagine Facebook  or a Facebook competitor without stupid Ads.   As long as you buy enough from Amazon, you can consume media without ads.  Periodically, Amazon will let you know if you need to add to your “account”.

There will be many ways to do this but one will be the Amazon Shopping Network.  Think of Home Shopping on steroids. It will be an informercial channel which is tailored for the individual.  The informercials will be made and supplied by the companies offering the products.  With today’s technologies even small companies can create compelling video Ads.  Take Kickstarter as an example. Check out this Ad for the Menurkey which was designed by the nine year old son of one of my friends to celebrate the unusual event of having Thanksgiving and Hanukkah on the same day (OMG did I just make an AD?). In addition to knowing the price for every product, there will be an indication of the number of “points”.   And of course, you can always make a direct deposit into the First Bank of Amazon.  Amazon will be paying the content providers something less than you pay them (after all they are a Bank).

Google and Apple get left in the dust

Assuming the content is unbundled and available to anyone for distribution at a price, Google and Apple will have a very difficult time duplicating the Amazon strategy.  As I indicated, Amazon Points can be used to purchase content from any medium, even Newspapers like the Washington Post who coincidently just got a new owner. Jeff Bezos.

First Bank of Amazon is a great investment

My money is on Amazon (literally.)  Jeff Bezos is one of the few founders of major tech companies left.  He has a vision and the ability to implement his vision an is fortunate to be the King of Transaction.

4 thoughts on “The First Bank of Amazon or the End of Advertising as we Know it.”