about business / Avram's Past / broadband / Technology 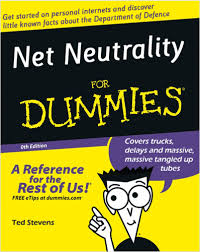 My friend, Robert X. Cringley,  wrote an excellent blog post on Net Neutrality which you can read here.  I have a few thoughts I would like to share about this topic. The concept of Net Neutrality simply put, is that the supplier of broadband cannot enter into a separate arrangement to provide better services for some companies than they provide to all companies.  They can not pick and choose what applications and services you use in general.

In the beginning there was Greed

As frequent readers of my blog will know, I played a principal  role in the creation of residential broadband, first with the development of the cable modem and then a bit later with the development of ADSL.  Establishing residential broadband  world wide was my primary mission from 1992 when I first realized the potential of cable TV and how it could be used for high speed communications. Then in 1999 I left Intel to  “cash in my chips”.

I led the cable modem developments for Intel in my role as Vice President of Business Development. It was a joint effort with General Instruments (strangely enough at the time it was led by Don Rumsfeld who later became secretary of defense for George Bush).  My objective was to create a new medium of communications, entertainment and commerce.  So I worked on the opportunity from the bottom of the stack (hardware) to the top of the stack (applications), and how to monetize them and everything in between.  It was an amazing experience.

The Business of Broadband

It turns out the hard part was not turning the cable and phone system into a broadband network, it was making all this into a business that would thrive.  The key in getting the cable companies to embrace this was showing them it was opportunity to create an additional revenue stream and, also convincing them that it would put them into a stronger position vis a vis their satellite and telco competitors. It was all about greed.

Consumer Online was Built on the Backs of the Phone Companies

Back in 1992, there were online services for consumers but they used dial up networks.  Phone companies offered a variety of plans as they still do these days. Most consumers had unlimited local calls.  So companies like AOL and Prodigy would get local numbers.  This meant that the phone companies got zero additional revenue and did get some additional costs.  In fact the whole dial up online business was built on the back of the phone companies  although the online service providers had to have banks of modems to answer the incoming calls.  Since the modem would tie up the phone line, eventually some homes began to have a second line installed which was good for the phone company.

I the early days of the internet, most consumers would use their company’s computer network to go online.  I noticed people staying late in the office to connect with Amazon for instance.  Instead of “work at home”, I  called this” home at work”.

I tried to think what would be the best way to organize the payments for residential broadband.  I   thought that there should be a number of different ways to charge. I was very much influenced by how telephone calls were charged.  For those that are old enough, you will recall that long distance charges were different  depending on the time of day and day of week they were made.  I also thought about the equivalent of 800 long distant calls.  I imagined that a provider of content could elect to pay for the delivery of their content so that the consumer would have a better experience.

The cable companies wanted to keep billing simple.  I think they were right, at least at that time.  It would have been too difficult for consumers to understand multi-tier pricing right away and the cable companies certainly could not have handled the complexity.  Later, when consumers understood more about bandwidth speeds, cable companies and telco’s introduced different pricing for different speeds.  They also introduced the concept of static versus dynamic IP addresses which they hoped to use to separate out business users from true consumers.  I won’t go more into this.

The Role of Regulation

Regulation also played a role.  There was a concern that the cable companies would do things that favorited some companies over others and in particular could favor their own content.  We can see this behavior in how cable companies have packaged video content on their TV access.  While TV had a limited number of channels which could justify some of this, broadband internet did not.

How much bandwidth is enough?

As Bob points out, there can be significant improvements in how much bandwidth is needed. Think of this as energy conservation.  Right now we are wasting a lot of bandwidth.  Reducing the number of bits needed to stream a movie by half is the same as increasing the bandwidth two times.  Also, the more computation that cab take place in the cloud and the more data can move directly from one application/service to another, the least bandwidth we will need.

I think that the total amount of bandwidth needed in a home is pretty much proportional to the amount of video that all devices can stream simultaneously, plus some additional amount for other activities (the internet of things).  Latency is also an issue  particularly for interactive applications.  This will influence the movement of computing to the cloud.

Where do I Stand on Net Neutrality?

I am not exactly sure where I stand on net neutrality.  What I want is a high quality, high speed, low latency network for everyone in the USA. The quality of the US broadband is really poor compared to most of the development and even much of the developing world.

I would certainly be against anything that allowed the Cable or Telcos to pick and choose what applications, content and services we could access.  I am not against the idea that content companies can pay for us to have higher quality of services even if that makes it harder for smaller companies to get established.  I don’t see that as being much different than a big company having more powerful computers than a little company.

4 thoughts on “The end of Network Neutrality”