I wanted to share this message I recently received via LinkIn.  In 1992, I became the founding Chair of a non-profit called PluggedIn located in East Palo Alto CA.  I served in that capacity for seven years until my resignation from Intel when I  moved back to San Francisco.  At that time, East Palo Alto was an unenfranchised  virtual “no man’s land” located just outside one of the wealthiest cities in the USA, Palo Alto. It officially belonged to a different county – San Mateo.  One of its original functions was to sell alcohol to Stanford University Students.  It was in this very area known as Whiskey Gulch that PluggedIn was founded by Bart Decrem, a Belgian Law Student at Stanford. Bart went on to have a very successful career. Recently, he was a Senior Vice President at the Disney Cooperation. 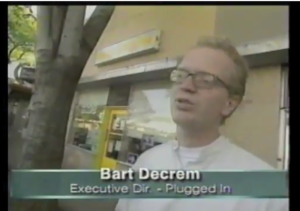 Later, Magda Escobar, also a Stanford graduate, took over as the Executive Director. Magda played a very important role in expanding the mission of PluggedIn and increasing the focus on youth.

Eventually, PluggedIn was merged with another non-profit in East Palo and, unfortunately lost its identity. The location where PluggedIn was originally located is now an office park with a Four Seasons Hotel.  You can read about that a bit later in this post.

I had a long history with East Palo Alto where I lived for a while in 1966 while tutoring African American high school students who had been accepted into a university program.  When Bart founded PluggedIn in 1992, East Palo Alto was primarily a black community with a growing Hispanic population. Now it is primarily Hispanic.

While we were a technology center, our focus was to teach kids to use technology in support of other activities such as multimedia content creation.   A key initiative was developing youth-based businesses and so we created PluggedIn Enterprises.   Some of the kids developed a “business” for AOL for instance.  Some of the kids developed a web design group.  When I left Intel in 1999 to start The Avram Miller Company, I hired this group to do my website.

Over the years, I have run into people who benefited from various nonprofit actives in which I was directly involved in a leadership role.  It is amazing to meet someone that has a successful business that they trace directly to help that they got when they were just 16 years old.  The message I am posting is an example.

In researching for this article, I also learned that another alum, Muki Hansteen-Izora,  (featured in the video below) ended up graduating from Stanford and is now a research scientist at Intel Corp.  By the way, Muki at one-time worked with my son Asher in creating and running EPA.net  which was a community ISP.  Another “kid” in the video, Nathan Kuriger, is now a Senior System Administrator at McLaren Software.  I am sure that so many others that went through the doors of PluggedIn have succeeded in life in part from the help that they received there.

Whisky Gulch was torn down to create an office park and a Four Seasons Hotel.   Most of East Palo Alto is located on the East side of highway 101.  So in a sense, this small area of the West really could be made a part of Palo Alto if the developers and local government could convince poor people of color to move.  The local government was especially in favor because this would have a significant  positive impact on the tax base.

PluggedIn was forced to move from the West to the East Side of Palo Alto.  I was no longer involved and do not really know much about what happened afterward, although I did visit the new location a few times and stayed in contact with Magda Escobar.  Eventually, it was merged with the Y of East Palo Alto.  Most of its history is sadly forgotten.  I could not even find much on the internet even though President Clinton  visited while he was still in office. There was even a documentary film made featuring Magda Escobar, called the Secrets of Silicon Valley.  The secret had to do with the poverty of some living so close to one of the richest communities in the USA and how little those that had their success in High Tech cared about helping others to step up.  By the way, I have a small role in the film which I would gladly show but I could not find the film online.  Here is a description of what I said in the movie.

The approach works best when the film juxtaposes words and images that show Silicon Valley’s conflicting ideas about itself. Take, for example, the scene in which Avram Miller, the emeritus chairman of Plugged In, and a former vice president at Intel, describes why it was so hard to raise money for the nonprofit in this valley of gold. He parrots what a Silicon Valley executive might think — but would never say — about giving his money (his “life force,” as Miller puts it) to a nonprofit: “They’re going to squander it on stupid things. How can I give money to people who I don’t respect.” As he’s saying this, Snitow and Kaufman show us a Silicon Valley executive waving like a sultan as he hams it up on the back of a camel on Sand Hill Road at the soapbox derby challenge.

My purpose in posting it is not to demonstrate what a great guy I am.  Hopefully, you are already convinced of this 🙂  I want you all to understand the importance of giving this kind of support.  All of you can change the lives of young people in very meaningful ways.  You may not always see the results, but they will be there.  I hope this inspires you to find a way to contribute – not just money, but to give your time and energy in support of the future of our underserved youth.

Here you can see a wonderful video from back in the day about PluggedIn that is really worth watching so please do.

Here is the message that caused me to write this blog (Don’t forget to check out ECO-Dumpster.com Omar’s company.)

I am certain you don’t remember me, but I sure do remember you. About 15 years ago I was 16 years old you hired a small nonprofit out of East Palo alto to revamp your website. I was one of the guys that worked on the site 🙂

Coming from my background, exposure to the business world was foreign yet exciting. Thank you for the opportunity. It was inspiring and motivating. Please know the small things may not mean much at the time but they can mean a lot to others. Thank you for that small spark, for that is all I needed.

3 thoughts on “Secrets of Silicon Valley”