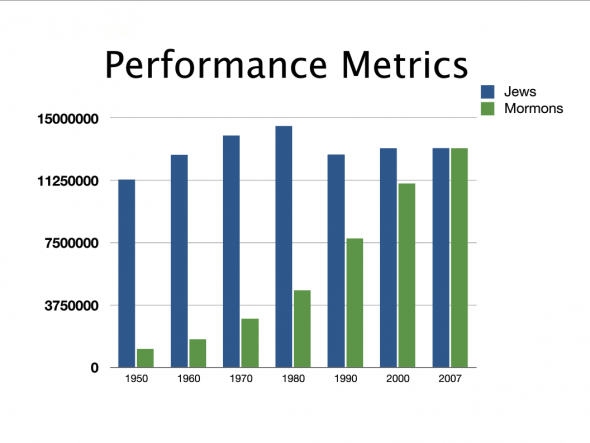 Given the potential election of the first Mormon  president, Mitt Romney, I have been trying to learn a bit about the Mormon faith and was pretty amazed to find out their are now more Mormons then Jews.  Jews have been around for more than 5,000 years and Mormon less than 200 years. So I have been trying to understand how this happened.

Brief History of the Formation of the Jews
The Jewish people have been around for about between  3,500  and 5,500 years.  Judaism was started by a guy called Avram  (I am named after him) who at the age of 75 gets visited by God. God convinces Abraham that he is the one and only God and that Abraham should stop worshiping cows  and statues.  Why God waited so long to reveal himself  and why he picked Abraham is a bit unclear to me. He and his wife, Sarah were childless.  Avram made a commitment to God which is called “The Covenant”. God told Avram to move from what is now Southern Turkey/Iraq to  Israel/Palestine (I guess that God did not know about oil fields).  Ten years later, Avram  and Sarah are still childless.  So Sarah suggests that Avram try to have a child with her maid, Hagar.  It took just one time and Hagar got pregnant with a son that they named Ishmael who interestingly is  the ancestor of Muhammad, the founder of the Muslim faith.  After ten more years, God told Avram who is now about 95 years old, to change his name to Avraham which means “father of many”.   To re-enforce the Covenant, God instructs Avraham to circumcise himself and  requires that every male member of his household including Ishmael (who was 13 years old at the time) be circumcised. (Now many if not most Muslims get circumcised.  It is typically performed around the age of seven but it can happen even in adolescence.  Muslim men see this as something that was taken from the Jews and may explain why they are so angry at them).  A few years later,  Sarah gives birth Avraham’s son, Isaac.  Once Isaac was born things got kind of heated between Sarah and Hagar (mostly to do with potential inheritance rights). Hagar and Ishmael got booted out.  The result of this can be seen in the middle east conflict today.

Brief History of the Formation of the Mormons
The Mormons started about 190 years ago in Upper New York State by a guy called Joseph Smith.  Evidently, he was visited by an angel named Moroni, who directed him to a number of  Golden Plates on which a story was written.  This story became the Book of Mormon which is the foundation document for the Mormon faith. Smith then moved to Missouri, a state where the Mormons believe the Garden of Eden was located.   Smith wanted to build a city called New Jerusalem.  Eventually, Smith and his followers got kicked out of Missouri. They moved to Illinois where Smith and some others were killed by a mob of people that did not care for them very much.  Brigham Young took over the leadership and a few years later moved the center of the church to Utah where they had a difficult relationship with the native Indians that were living there.  The church began promoting polygamy which had been practiced in secret (kind of like Big Love).

Why are the Mormons Growing so Fast and the Jews Not
I have been trying to figure out why the Mormon’s have been so good and growing their numbers and why the Jews have been so bad at the same thing.   Clearly Jews are very successful.  While only 0.2% of the world population, Jews have more than 20% of the Nobel Prizes (Jews are 2% of the USA population but have 34% of the Nobel Prized given to Americans).   Jews represent 25% of the worlds billionaires  which is more than 300 people so they do pretty well with money too. There are only one or two Mormons have won a Nobel Prize and about seven billionaires.

Both religions believed in polygamy but Jews stopped doing it pretty much several thousands of years ago.  It turned out the one Jewish wife was enough. Mormons men could not seem to get enough wives especially young ones which meant kicking aout a lot of young mormon men to make this possible for the church elders.  Mormons have to give ten percent of their income to the church every year which seems like a big tax and so this is really impressive.  We Jews prefer to decide on our charity ourselves.  We both have temples but the Jewish one is pretty much a ruin and is located in a difficult neighborhood.
While Jews are not big drinkers, they are allowed to drink but not Mormons. Not only that, but Mormons can’t even drink coffee.

Could it be Marketing?
I don’t think Jews or Mormon’s have been that great in marketing their religions.  Jews have been defined mostly by Christians and Muslims. We had a pretty good logo, the Star of David, but then the Cross came along. I could not really find a logo for the Mormons.   Jews are often thought to be both being the worst form of Capitalist with simultaneously  being Communist.  Mormons are thought to be good business people in general but are still thought by many as being racists (like not letting African Americans into the clergy) and people that wear magic underwear.

Lack of a Jewish Sales Force
Now, we are about to get into it. The Jewish religion has no sales force.  We do not believe in evangelizing.  It is actually pretty hard to convert.  Not only that, but for most of our history we have been the target of active campaigns to eradicate our people including but not limited to the Holocaust and the Russian Pogroms. Right now there are whole countries like Iran, plotting how to destroy a large number of us. The Mormon’s, on the other hand, have as one of their major objectives converting others to their faith even if they are dead. Even Ann Frank was baptized after her death in the Mormon faith.   They pour a major amount of the money they receive into growing  the church.  Young  Mormons have to take a few years off to become missionaries.  They are really successful at it. More than half of the Mormons now live outside the USA.  Mormon’s are becoming less geographically concentrated while Jews are becoming more concentrated with about 80% living in just two countries, Israel and the USA.  The Jewish population is growing only at half the rate of the world population and that is only because of the ultra orthodox who can’t watch TV on Friday evening and have to find something else to do.

One of the key distinctions between the two religions is how they think of life after death.   The jewish religion is not very focused on the afterlife.   Some Jews that are more mystical in their beliefs may spend sometime considering what happens to us after we die.  But for most of us jews, what happens after death is more a question of estate planing and changing your will if you are pissed off at your kids.  Mormons on the other hand, are very much focused on life after death.  The even have three heavens.  I would think that providing a path to eternal life is a pretty attractive marketing campaign and maybe one of their main selling points.

What’s going to happen
It is clear that Jews will be come a smaller and smaller part of the earth populations while the Mormons are growing almost as fast as Moore’s Law. It is estimated by some (mostly Mormons) that their population will reach two billion in the next hundred year.  So what should we Jews do? I say buy real estate in Utah.

11 thoughts on “Mormon versus Jewish Population Growth: The Importance of a good Sales Force”