A Clash of Generations 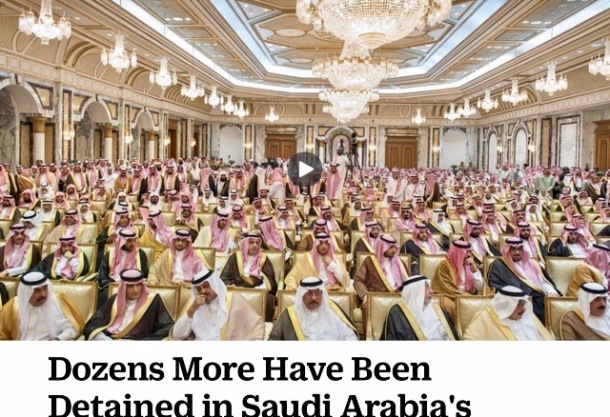 There is a lot going on in my neighborhood.  The 32 year old Crown Price of Saudi Arabia is really shaking things up in the region.  He just confined 13 of his rich and powerful cousins (many billionaires) in the Ritz Carlton.  He closed down the airport where they keep their private jets.  I am sure he has stopped their ability to transfer assets (he froze 1700 bank accounts). One of the Princes try to leave the country by helicopter. It was probably shot down because it crashed and killed the prince and the crew. He caused that Prime Minister of Lebanon who is also, strangely, a Saudi Citizen to come back to Saudi Arabia where he resigned his position.  I think he is also under some kind of house arrest.

Saudi Arabia is a pretty complicated country which I don’t understand very well. It was formed recently, in 1930 by  Abdulaziz Al Saud and has had just three generations of rulers.  Britain is responsible for creating this country as well as so many other countries in the region.   The current King Salman, is one of the sons of the original ruler.  He suffers from Alzheimer’s.  Which is one of the reasons he has effectively delegated his power to his son, Mohammad bin Salman (MBS), the Crown Prince.

The Saudi population is made up of three generations.  The first was not born into oil riches. Up until the 60s, the majority of the population was still nomadic. The second generation has only know an oil rich nation. The royals and other prominent people continue to live lavish lifestyles. They have transferred a great deal of the countries wealth out side of Saudi Arabia. You only have to visit Beverly Hills or London to observe this.

Over half the population is under 30 years.  Many of those under 30 have been educated outside of Saudi Arabia. They are connected to the world via the internet.  This is certainly the case of the Crown Prince, MBS.  This generation realizes that the oil music will not keep playing.  They even understand that Global warming could make living in their country impossible.  They understand that the second generation does not really care about the future and certainly the future of their country.

I believe that the arrests came because the Crown Prince was trying to put a stop to the transfer of wealth.  I think he wants most of the money of those he jailed, which is vast, to be returned.

What is going on is definitely a power struggle but one that is generational.  MBS has the backing of his generation.  He has a populist message.  He is risking his life in his effort to consolidate power and develop a strategy for the future of his country. I don’t really know that much about MBS.  I know he also loves a lavish life style.  But I also know that he is truly interested in creating a future for his country and a future for himself.

One of the most interesting projects is his Saudi Vision 2030.  I hope to write more about this in another blog. In the meantime check out https://www.youtube.com/watch?v=Tb7OveLpSzc.

It is a beautiful day in the neighborhood.

Saudi Arabia is locked in a battle for leadership of the region with Iran. In many ways, this is a religious conflict as well.  But I think it is mainly about influence and power.  Saudi Arabia and Iran have been fighting for years mostly by funding proxy wars. This is currently playing out in Yemen and Lebanon.  One of the most interesting effects is a growing alliance between Saudi Arabia and Israel.  Their mutual hatred of Iran is bringing them together. It also allows the Saudi leadership, which has found it convenient for the last 70 years to focus their population on hating Israel, to now channel those emotions towards Iran.

Palestine is an obstacle to be discarded

Saudi Arabia has never really cared about the Palestinians and would be happy to offer them up.  There are interesting signs going on.  The leader of the Palestinians, Abbas, just went unexpectedly to meet with MBS in Saudi Arabia. Would love to know what was discussed. Jarred Kushner was recently in Saudi Arabia spending a great deal of time with MBS.  Remember, Trump charged Kushner with fixing the Israeli/Palestinian conflict.  There are articles being written that Saudi Arabia is trying to get Israel to go to war with Hezbollah,  the Iranian terrorist organization that is also now part of the Lebanese government.  Actually, Israel would love to wipe them off the map, although this might not be the best timing.  The Israeli Prime Minister, Netanyahu, recently gave a speech in London where he seemed to stop giving lip service to the Two State Solution.  Saudi Arabia is in a position to provide enormous financial support to Palestine and surely some of that would pass into the personal pockets of Abbas and his corrupt government. The Saudi’s will help Palestine if this results in a way to recognize and align with Israel.

But the big play will be an outright attack on Iran involving Israel, the USA and Saudi Arabia.  But first Trump has to deal with North Korea (and a few other problems).

I think the other Sunni countries like Jordan, Egypt and the UAE will be happy to go along.

I don’t know what Russia or Turkey will do.

Now, I should say that I give MBS a 50% chance of surviving one year.

I think I will stock my bomb shelter at my Tel Aviv home with some actual books.  Just in case we lose power for a while.

9 thoughts on “The Saudi Century? Part I”