About life in the last third / Travel

My wife and I just spent twelve amazing days traveling in Egypt. This is not a travel blog (my wife writes one of those) but is just a collection of some thoughts and observations.

However, here are the main travel points:

As I began to age, I thought a lot about what happens to us as we get older and what I could do to stay young. I am now 72 years old. One thing I noticed is that as we age, we tend to see our comfort zone diminishes. Things we would do at 20 are no longer ok at 30. Risks we would have easily taken at 40 become great concerns at 60. I decided to fight this tendency by “forcing” myself to take at least one trip a year in which I had to overcome some degree of fear. For instance, we traveled around Indian when I turned 60 including taking a train. Trips to Argentina and Brazil also cause me some angst. Four years ago, I went on my own to Sharm el Sheik in Egypt and then had a car drive me through the Sinai to Taba which borders on Eilat Israel, which is where I entered Israel by foot. 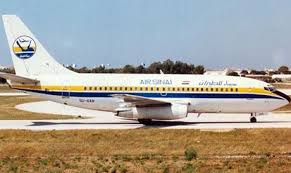 This years discomfort trip was to Egypt. I discovered that there is a flight every day between Cairo and Tel Aviv but no one seems to know about it. You can’t book it online but have to use a travel agent. The company is Air Sinai which is owned by Air Egypt but it is not listed on their site. However, they do show it at the Cairo Airport Arrival and Departure boards. I was concerned about our safety, especially because we live part of the year in Israel and I have Israeli citizenship as well as American. It would take someone less than five minutes on the Internet to find that out. Many of my Israeli friends were concerned about our safety. One of our friends with strong connections within the Israeli security forces warned us about traveling to Egypt. But we pushed on.

From the moment we arrived, we felt totally safe. We walk around Cairo and Alexandra on our own (of course, we were in a nice part of the towns. In the beginning, we did not tell people we came from Israel and would be going back but later we felt perfectly comfortable disclosing that. I should say that most of the time we had a guide and a driver and we certainly did not use public transportation.

The Egyptian Government is very concerned about the safety of tourists. The country is suffering from a lack of tourism which brings in badly needed hard currency. We found out that our tour guides had to register our travel plan and they kept tabs on us.

Egypt feels very much like a “security state” which is fine when you are on the right side of the “law”, I guess.

Cairo from the Four Seasons Hotel

There are about twenty million people in the great Cairo area. There are way too many cars and it was impossible for us to cross the streets. There were almost no lights. Egyptian pedestrians just walk across the streets as if they were ignoring the cars. Our guide told us that one had to walk at a deliberate pace because the drivers would compute where you would be. If you got scared and slowed down or sped up, they would hit you.

There is a lot of illegal building and I am talking about eight story high buildings. Farmers sell their land illegally to developers. The developers put up the basic frame of the building very quickly. Then they sell the unfinished units to maybe 200 buyers. The buyers finish the inside of the building but not the outside. Eventually, the government provides utilities. I saw hundreds if not thousands of such buildings. 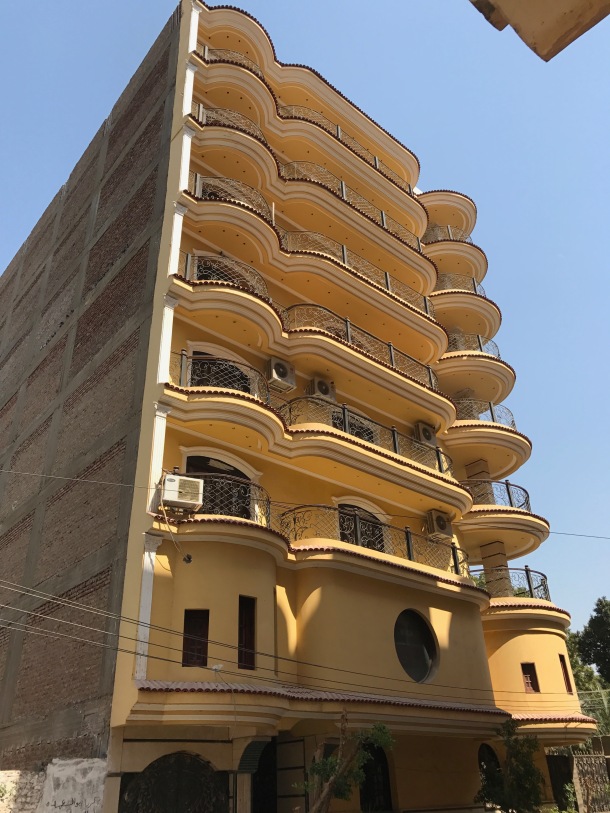 Rich people build homes for themselves, their children and grandchildren. As they have son’s, they add a floor to the building for the son, his future wife and their children. Daughters are expected to marry and move in with their husband’s family. 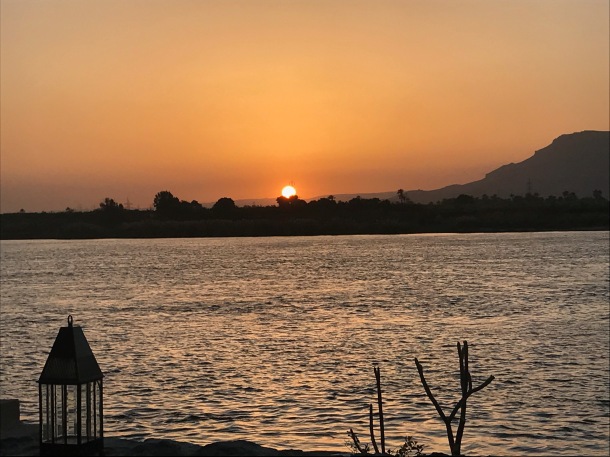 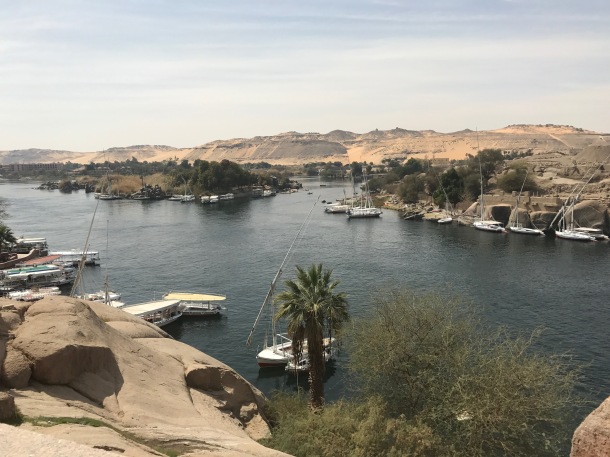 Near the Aswan Dam

The Nile is everything!  Egypt is a desert with a big green ribbon flowing through it. We took a four-day boat ride up the Nile from Luxor to Aswan. It is an experience that should not be missed.  Normally the Nile would be full of boats packed with tourists.  But of the hundreds of boats available, maybe only ten were operating.  Our boat had 20 staterooms but only five were occupied.

Tombs, Mummies and left after death

Pyramids with no visitors.  We drove right up.

The Egyptians believed life as we know it was just a stepping stone to eternal life provided you did the right things during this life (Karma).  The ancient culture was all about preparing for next life.  The result were pyramids, mummies,  and tombs and you will see a lot of them.   Normally, there would be massive lines to visit these sites but not now.  We could drive right up to the Pyramids.

We actually found he tombs more interesting.  Some are in amazing condition.  You can see in the paintings how people lived more than five thousand years ago and in vivid color.

What happened to the Egyptian Jews

The Jewish people have a long history with Egypt that goes back more than three thousand years. I write about this a bit later.

Prior to the establishment of the State of Israel, there were about 75 thousand Jews living in Egypt, primarily in the cosmopolitan centers of Cairo and Alexandra. The were a successful group. With the establishment of the State of Israel and subsequent War of Independence, sentiment started turning against the Jews. More than 40% of the Egyptian Jewish Population left Egypt including about 14 thousand that went to Israel. The situation was made worse by the Egyptian Dictator, Nasser, who started nationalizing businesses including those of Jews. The Suez war, in 1956, in which England, France, and Israel attacked Egypt after its government had seized control of the extremely important Suez Canal from the British was the last straw. The most of the remaining Jews were forced out. The few that remained faced a great deal of punishment during the 1967 war. After that, Egypt like so many Arab Nations that had vibrant contributing Jewish Communities was left Jew Free and has suffered greatly economically culturally. The Jews that left Egypt for Israel have played an important role in creating the very successful modern State of Israel. 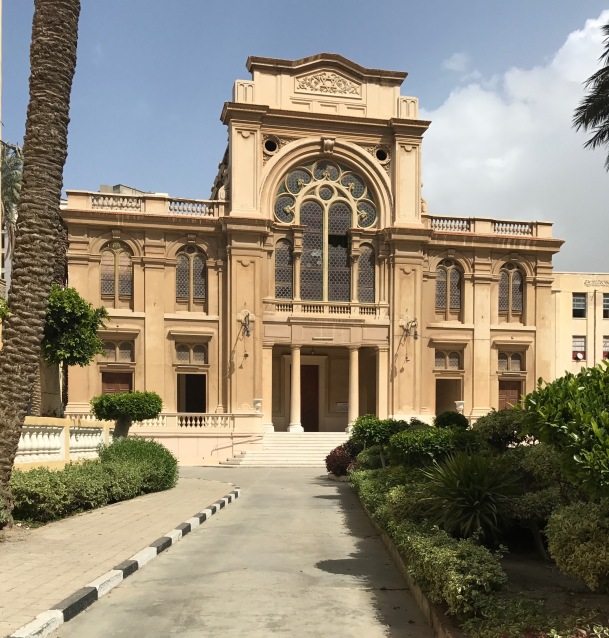 We were very lucky to visit the main Synagogue of Alexandria. It is closed and normally, one needs to make advance arrangements. We had a very resourceful guide and we were able to visit this magnificent building. There are only ten members of the Synagogue left and of those, there is just one man. They can not have services because ten Jewish men are required for a service. I would love to go back with eight other Jewish men so that together with Josef, the one male member, we could read from one of the many Torah that are still there.

Egypt is an amazing country. This is a great time to visit. Don’t be scared!