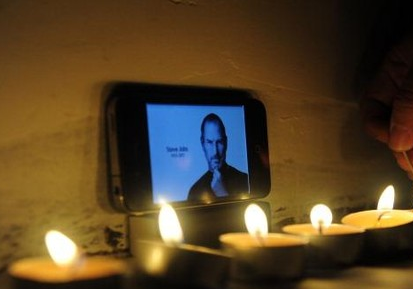 As a reader of this blog, you probably know that Apple stock has lost almost 40% of it value from a high of $705 to low of $409, as of this morning.  In just seven short months Apple has gone from the “wonder company” which might have become the first company with a trillion dollar market cap to a “dog”.  Tim Cook went from sucessor of Steve Jobs to an Apple version of Steve Balmer.  At the earning announcement yesterday, Apple reported a down earnings  quarter year over year for the first time in a decade.  iPhone sales are now having single digit growth.  Apple is entering the replacement phase of their  business.  What was worse, there was no indication of new products to the fall and nothing about a new breakout category.  Rather, Apple said it would buy back its stock and double its dividend and thereby demonstrated that do not have better ideas for their cash like acquiring Dropbox and/or Netflix.
What went wrong.  Apple had been growing by creating new categories of computing from the iPod, iPhone and iPad. They were brilliant at design and marketing of these products.  The combination of their increased buying power coupled with the benifit of Moore’s law allowed them to make significant improvements in these products but all good things come to an end.  For instance, how many pixels do you need on a phone?  The answer is clearly no more than you can see.  In the meantime, the double edge sword of Moores law, means that it is easier for competitors to catch up from a lower price point.  As products come to market from companies like Samsung that have similar capabilities but at much lower price points,  new years especially in price point sensitive geographies  start buying these products. Apple can not easily reduce price without having a major effect on their margins.  They want to keep the margins up feel that they can hold onto most of their customers because of the high cost of switching out.  Cook thought he could grow the company by explaining in new markets but that is turning out to be harder than he probably thought.
Apple’s strength has been in integration of devices but many young people only have one device.  And more and more, applications are moving to the cloud.  I use to tell Andy Grove that Intel’s competition was not AMD but it was bigger screen monitors.  He never got that by the way.  Right now there are many companies chipping away at Apple in areas that Apple does not really pay attention to. For instance Dropbox.  Apple is bit particularly talented in network technologies.  The real sleep here is probably Amazon.   The cloud will have impact on iTunes.  Why own music when you can subscribe to Spotify.
Steve Jobs was not only the composer of Apple’s success but he was also the conductor who had an excellent sense of time.  Steve would tell everyone inside and outside of Apple that Apple would not do certain things (“we will never develop a phone”) only to reverse himself later either because he changed his mind or he just was trying to manage company priorities.  After Steve died, the company continued to work on the things Steve said to do but no one was able to work on the things Steve said not to do.  That is why it may be necessary for Apple to Channel Steve to get permission to go against some positions he took.
It was reported that Jobs figured out what to do with the TV causing lots speculation about a true Apple TV.  I have always had might doubts about this.  It just did not make sense.  I have spent months trying to figure out what if anything Apple could do to do to TV what it did to the cellular phone.  Well I finally figured it out but I realize that Apple is no longer capable of making it happen.
If there heaven  and Steve Jobs is there, I can imagine that he is looking down on Apple and trying to figure out how to change the channel.

2 thoughts on “Time to Channel Steve”